Enjoy Painting Catlalonia is a workshop series run by Angela Barbi in Spain. I will be teaching one this year in Sant Feliu de Guíxols, September 1-7. This will be an in-studio session, but we will be enjoying a gorgeous location overlooking the ocean. I have already heard about the wonderful job Angela does in organizing, and if the roster of artists connected with EPC (Alvaro Castagnet, Charles Reid, Joseph Zbukvic, etc.) is any indication, this is one of the top watercolor workshop venues in the world. I'm very pleased and proud to be included. I hope you will consider enrolling, it promises to be a fun week!

Many thanks to Victor Retuerto and Angela for putting together the video above. Guess whose music they used? :-) All information about workshops and tutors are listed on the website, and check out all of the cool pics!

Artgraphica.net is a website dedicated to art instruction in many forms, across a wide range of styles and mediums. A few articles I published about five years ago on another website were recently added to the watercolor section:

Watercolor Batik: Koi
The articles are quite detailed and include many photographs. The koi demonstration is an abbreviated version of what is covered in even more detail in my Innovative Watermedia DVD from Creative Catalyst Productions.

Thank you to Gavin in the UK for providing this valuable online resource, and for putting it all together in such a beautifully-designed site!
Posted by Nick at Monday, February 22, 2010 12 comments:

Kanuga Watercolor/Watermedia Workshops is run by Robbie Laird, in a gorgeous North Carolina mountain setting. This year it's happening April 11-16, and I'll be teaching there with eleven other recognized painters. I believe they will have something like 250 people attending - not your average workshop! I'm unsure of remaining spaces, but if you can't make mine I hope you'll consider signing up for one of the other artists. There are many activities on the schedule and it promises to be a wonderful event. Contact information is on the website. 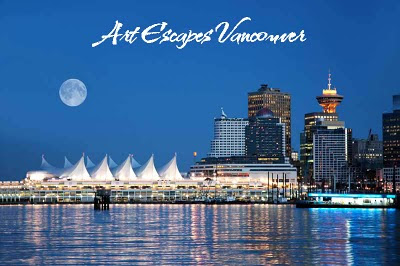 Art Escapes Vancouver is a workshop organized by Jamie Kelley, and is taking place on incredible Granville Island, April 22-24. (see photos on the website) Vancouver was recently rated the best place to live -- anywhere! -- and I can believe it. I haven't been there since I was a kid and am very anxious to return. Also teaching there this year will be renowned watercolorists Joseph Zbukvic and Ted Nuttall. If you can't make my class, I hope you can make one of their's. Contact information on the website.

Special note: a big thanks to Donna Zagotta for listing this as one of "27 Art Blogs to Watch in 2010." Check out her marvelous work and bookmark her site!

A recent post on this entry regarding photography and projectors seemed worth a special mention here, and it gives me a chance to expand a bit in a direction I didn't go in the Robert Genn article.

Thank you for all these wonderful posts. They are such a treat to go through.

With all due respect, I would like to say something in response to (another poster's) comments about Richard Schmid. I have read his book Alla Prima and also seen the video where he takes pictures of a scene for making a landscape painting. And I dont think he expresses contradictory ideas in the two. He is quite clear about the limitations of painting from photographs and how they can never substitute the real plein air experience. However he also agrees that under certain circumstances photographs can come in very handy for example when there is not enough time to finish a painting en plein air. But it's still a compromise, and that's what he says even in the video. So I dont think the two things really go contrary to each other. I do not think someone as technically sound as Mr. Schmid shall ever have to resort to tracing.
Thank you
Best wishes,
Vinayak


Vinayak - thanks very much for your post, I appreciate it. I don't want to put words in (the original poster's) mouth, or take a chance of misrepresenting her intent, so I'll defer any discussion there...maybe she'll have a chance to post again.

But you raise some things that I can comment on from my own perspective:

I understand the reasoning behind the plein air tradition, painting from life, etc. and have enormous respect for the people who do it as well as Schmid. (much less respect for people confusing method with message) There is no doubt the human eye can discern things that escape the camera lens, to a point, and there isn't any substitute for real life. In my case, however, this apparent advantage is somewhat, if not wholly, irrelevant, for a few reasons:

1. While many artists seem to be driven to paint what they see, I'm driven to paint what I don't see. Most all of what I do is stuff that's flitting around inside my head, not borne from real-time observation. I don't walk through a flowery meadow, for example, and think "I'd like to paint that." Could be a character defect, but it just doesn't happen to me.

2. I don't pretend to possess a technique that would necessarily benefit from observing in real life the nuances of lighting, form, color, shadow, etc. In fact, that could even be a handicap for me, as too much information can be distracting and overwhelming. I know myself well enough to realize that what the camera omits is very possibly something that a) I don't really care about, b) I'm not good enough to reproduce or interpret anyway! So much painting I admire is a result of subtraction and simplification. I can do this on my own -- many of us do, at least to some degree -- but I also like how the camera or even a computer program accomplish this.

3. One of the most unfair indictments of the camera in connection with artists is the unequivocal notion that it can’t see what the eye sees. How wrong this is; often it sees far more! Think of all the blurred-motion photos that give us a fascinating idea about the visual representation of movement, not to mention the myriad bizarre effects the camera produces through “error” that might inspire the artist. One need not look any further than the unparalleled work of Alex Kanevsky to understand how important the camera has become in the hands of contemporary masters.

Getting back to the projector issue…knowing what I do about his work and methods, I don’t believe Schmid would have any use for such a device. Whether or not he would use something to transfer a drawing, large-scale, I have no idea. The main point I was making on Genn’s site is that there are other applications of the projector that are quite useful. But nobody ever talks about them; the moment the issue is raised, there is the typical one-dimensional, knee-jerk purist reaction that ignores the nuances ;-) of the subject. Most frustrating, is that I often agree with many of their points…. but they never seem to notice.
Posted by Nick at Thursday, February 11, 2010 22 comments:

The Pennsylvania Watercolor Society 31st Annual International Juried Exhibition will take place October 1 – November 14, 2010 at the Crary Art Gallery, Warren, PA. I'll be the juror of selection, and the entry deadline is May 31. Click here for downloadable prospectus. This is a major exhibition, I encourage all serious watercolorists to enter. Good luck!
Posted by Nick at Sunday, February 07, 2010