Having fun on a 3/4 size kid's guitar! First the bass line, then rhythm, then lead on top using the Lexicon JamMan looper. All improvised, one take.
Posted by Nick at Friday, September 24, 2010 12 comments: 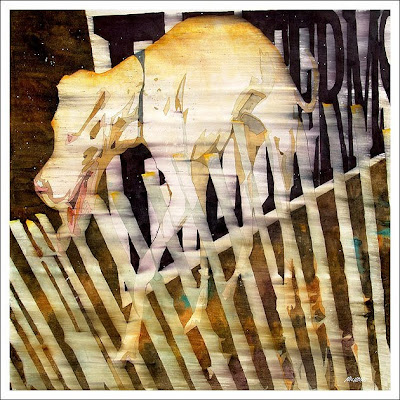 A blog buddy urged me to organize thoughts expressed in my replies to comments posted on this entry. Realizing it could add up to something close to an artist statement or explanation about personal "process," I pause. Re the former, I rarely read artist statements. They tend to subtract points from the work before I've even seen it, and in some cases allude to things that tell me I'm about to see some bad art. Without getting specific on that score, I've also heard this opinion from galleries and curators, etc. I don't recall ever reading an artist statement that measurably enhanced my enjoyment of the work, so I'm reluctant to compose one. Anyhow, I prefer the idea of art speaking for itself.

The process part is more interesting, especially if you happen to like the artist's work.

When I used to hear artists discuss their process(es), I always felt like a bit of a chump. They had this thing that sort of guided them and it seemed as though there was a discipline to it. I, on the other hand, had no such method or consistency. Eventually I decided that not having a process was my process, flying by the seat of my pants. Rather than fitting subject matter into a certain approach, style, or ethic, I simply would get an idea for a painting, imagine how I think it would look best to me, and then figure out how to do it -- or at least try to do it. This often means going back to square one with each new piece. In workshops I tell people that I often feel like a rank beginner when starting a painting, and that this is my "comfort zone." Not knowing where it's going but listening to the picture as it takes shape has yielded better and more surprising results than anything I likely could plan. It doesn't always come, and it can't be forced. I like how the poet William Stafford described it as a thread: you search for the end, pull gently, and follow. Which is starting to sound suspiciously like a process. :)

And so I've ended up with a body of work that is all over the map. I like it that way, diversity is one of the things I value most in art. Part of this is due to an inclination to avoid much of what I've seen in watercolor since I first got hooked. There is a lot of recycling in every medium, and watercolor is no different -- maybe worse. Perhaps because of its immediacy and associated traditions, there are legions of watercolorists who develop a style that often says to me "this is how I paint skies...this is how I paint trees...this is how I paint figures" etc. Facile and attractive, but I can tire of it quickly. Lots of painters play almost every tune in the same key, same tempo, with the same feel. I've been to concerts like that, but I don't stay long.

The painting above is an example of something that popped into my head a while back. I've never painted a dog, and don't even particularly care for dogs (un-American, I know!). But I had a hankering to see something like a junkyard canine with a fence and sign. Nothing deep, just shapes and colors and edges. Got it out of my system. 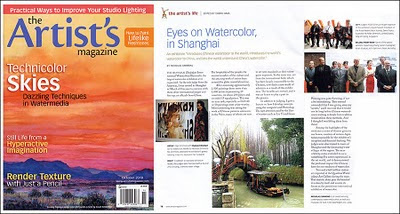 The new October 2010 issue of The Artist's Magazine has a feature I wrote about the Shanghai Zhujiajiao exhibition (see earlier posts here and here re the judging and opening) on The Artist's Life page (edited by Cherie Haas). Photos include my wife Olga at the opening with my painting Russian Woman, myself with the other judges, some of the award winners, and the lucky shot I got in the water village of Zhou Zhuang. Sorry about the low-res pic -- if you don't subscribe, please go out and buy this excellent magazine!
Posted by Nick at Sunday, September 05, 2010 11 comments: