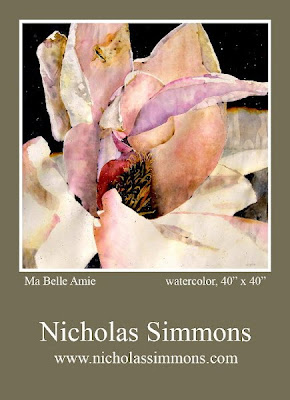 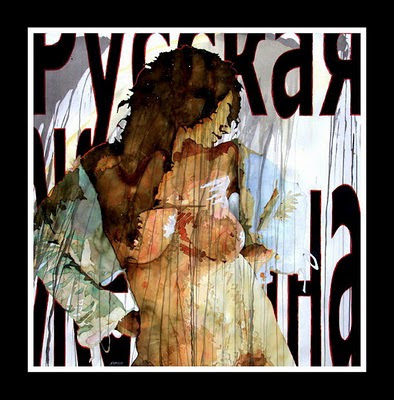 Russian Woman - 127 x 127 cm.
The 14-hour flight from Chicago to Shanghai was very comfortable, and the difference between the USA and China couldn’t have been more extreme than the contrast between O’Hare and the remarkable Pudong airport. You can almost eat off the gleaming floors of the parking garage of Pudong, and the whole place just sparkles. Everybody very courteous and efficient. I was met by two impeccably-dressed young gentlemen who drove me the 1 1/2 hour trip through incredible traffic to the Royal Tulip Garden Hotel in the Zhujiajiao district. I was surprised to learn they already knew much about me, my art, and my music. I was getting a feel for the treatment we would receive while in Shanghai, and it was very nice, indeed. 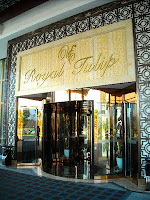 The hotel is beautiful, and there I met Xidan Chen, the man who conceived this exhibition, and his daughter Jo Jo, who did a marvelous job of organizing the daily itinerary, tours, and translating. There was a reception that evening for artists and top art officials who arrived from all over China, and I also then met David Taylor, renowned Australian artist, David Paskett, President of the Royal Watercolour Society in England, and the great international master, Ong Kim Seng. We were treated to a spectacular dinner in a private dining room of the hotel (see pics). 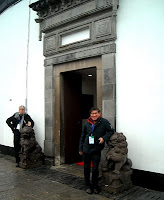 The next day was spent doing the selection of paintings at the Quanhua Watercolour Art Gallery, a 1300+ square meter traditional building set on a Zhujiajiao canal, and recently the subject of a 10M yuan renovation. I've never seen an exhibition space like it, a maze of rooms and galleries on two levels, all of which will be climate controlled and highly secured. 2.5 million visitors are expected in this gallery during the World Expo. They received over 2500 entries, which were reduced to several hundred, from which we made selections from two groups: the Chinese, and the international entries. Among the international group were 35 invited artists. We were seated at what looked like an altar, as young Chinese girls wearing white gloves brought out paintings (unframed) from the international entries for us to vote on. This took a long time, and we then inspected the paintings from the invited artists. We were guests at a special luncheon courtesy of the Governor of the Qingpu District of Shanghai, Mr. Zhang Guo Hong. This was precipitated by a reception in a very formal chamber of the Shanghai Zhujiajiao Investment & Development Co.,Ltd. as guests of the CEO, Mr. Lu. This corporation is one of the important sponsors of the exhibition. We were treated to gourmet dishes prepared in our honor, and many toasts were made to the success of the event and its bright future as the preeminent international watercolor exhibition. 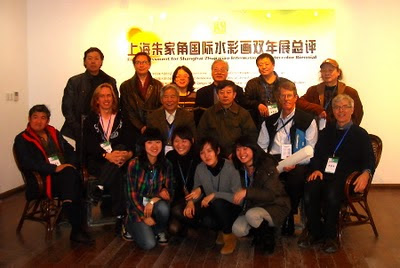 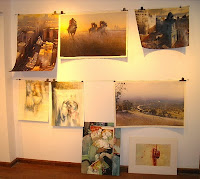 Back at the gallery, we then selected works from hundreds of the Chinese entries, which was a very demanding task. Here I saw the best watercolor work imaginable, it was astonishing. The vast majority of these artists are completely unknown in the west, though that will begin to change, I'm quite sure. (it's tempting to post photos of many of the paintings, but there will be a book published, and they will also be posted on the exhibition website) After that long and arduous process, we began selecting the fifteen equal awards. This was difficult for many reasons, not the least of which was that I felt awards could have gone to 25 or 30 paintings. There was much discussion, voting, re-voting, etc and several walks around the many rooms where the paintings were distributed on the floors and hung on walls. I am posting a photo here of several paintings on one wall from the international group, since we are all presumably familiar with their work: Alvaro Castagnet, Janine Gallizia, David Poxon, and Joseph Zbukvic. I won't discuss awards here, but some people are already aware of winners.

The judges were also asked to display work, and I contributed the new painting above, Russian Woman, which I believe is the largest piece in the show. 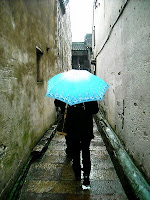 The next few days were spent on tours of the fascinating ancient water towns of Zhujiajiao, Zhou Zhuang and Xi Tang. Some of these areas are over 6000 years old, and the villages themselves over 1000 years old. People still live here much as they did generations ago, and we spent all day exploring the tiny alleyways and bridges. Everyone shot tons of photographs, many of which I imagine will end up as painting material. Luckily, it was raining the whole time, which made for even more atmosphere and color. One of the most beautiful moments was walking through a narrow passage next to a school (see pic at left) in Xi Tang while children were singing Ode to Motherland. I have always loved this song, and it was very moving. 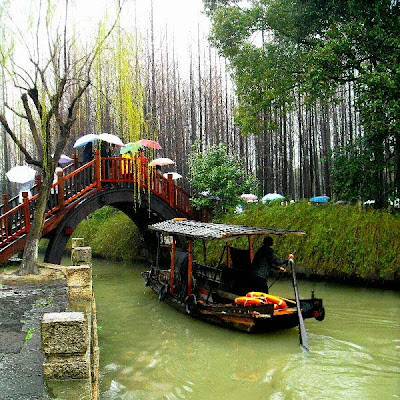 We spent another day in Shanghai checking out the World Expo district which is being worked on at a feverish pace 24/7 in preparation for 70+ million visitors, the downtown and Bund from the river, and exploring the jam-packed Yu Gardens. Kim Seng arranged for us to meet with Liu Yi, one of the very top watercolorists in China, a dashing and charming guy, and a major hero of mine for a few years. (one of his famous ballerina pieces is in the exhibition) This took place in the fashionable Luwan district, a blend of Eastern motifs and Western commerce. We visited a very chic café owned by a friend of Mr. Liu, and also saw the site of the first Communist Party meeting in China -- ironically located in the most capitalist section of town. He then arranged for us to have a meeting in the appropriately-named Richgate, the most expensive piece of real estate in Shanghai. No photographs allowed! That was quite an experience, and demonstrated the opulence that seems to pervade at least one segment of this city of 30 million people. That night we all had dinner in a revolving restaurant at the top of a tall building with breathtaking views of Shanghai, its lit highways and magical skyline providing some fantastic photos. 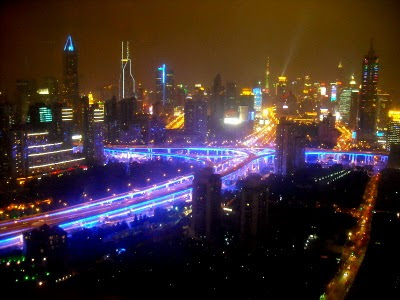 The last couple of days were devoted to lectures given by the two Davids, Kim, and myself. These took place at the auditorium of the Shanghai Zhujiajiao Investment building, and were attended by artists and officials from all over China. David Paskett lectured on his experiences living and painting in China; David Taylor did a fine painting demo; Kim gave an in-depth talk on the history of British and the California School of watercolor; and I gave a presentation, with music, of how and why I do what I do. The reception was quite enthusiastic for all, and the attendees were amazed that I gave away all my "secrets"! Looking out at the unbelievable talent present was a bit daunting, but I did my best. Afterwards I posed for countless photographs with everybody, and forged friendships that I expect to last a lifetime. I am returning to exhibit in Shanghai soon, and look forward to opening a new world of opportunity in China. 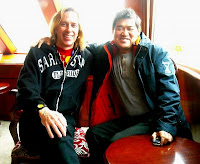 I can't describe the thrill and honor it has been to be chosen to represent the Americas as a judge and exhibitor in this landmark exhibition, the largest in the world. It is impossible not to speak in superlatives. After what I have seen in Shanghai, I believe the future of watercolor is there, thanks to these remarkable artists and the unprecedented respect and admiration extended to our medium by the Chinese. I actually felt like a celebrity there. Besides my boundless gratitude to Mr. Xidan Chen, I have to say a special thanks to Ong Kim Seng. I first discovered him in about 2004 after I got back into watercolor, and we struck up an internet friendship that has been as warm as it has been rewarding. Our meeting is all I had hoped for and more; he is one of he most brilliant men I have ever met, possessing a profound expertise in not just watercolor, but all art and all periods of art. His knowledge of cultures, politics, history, literature, and the most distant corners of the globe astounds me. He speaks eight languages fluently. I dearly love this man, and look forward to our reunion, which may be in Singapore (he is a celebrated artist in Malaysia), Beijing (to meet with Guan Wei Xing), or painting in the remote provinces of China, where he assures me I can escape the evils of MSG!

The exhibition opens April 15 and runs the duration of the World Expo through October. I'm very sorry to miss the opening as I'll be doing a workshop at Kanuga, but they are flying my wife Olga over in my place.

Update: thank you to Watercolor Artist magazine for the blog entry HERE, email notice HERE, and to Creative Catalyst Productions for another blog entry HERE. 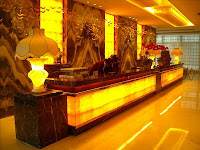 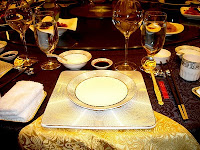 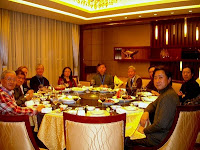 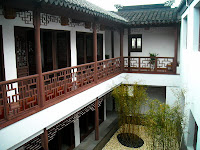 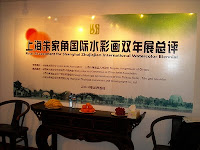 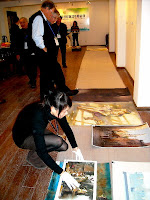 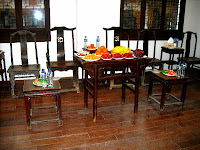 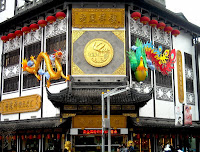 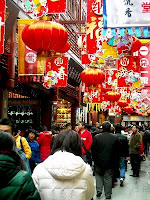 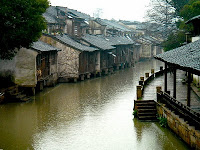 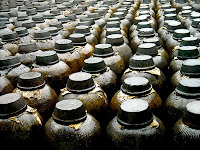 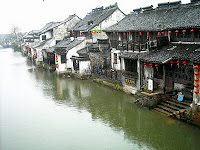 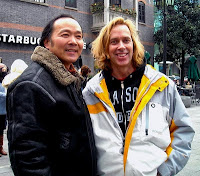 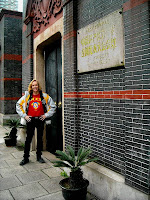 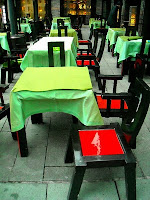 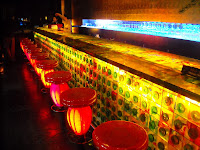 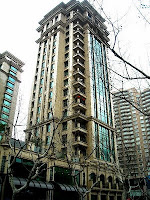 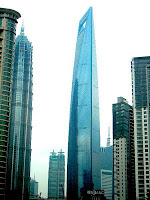 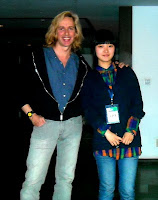 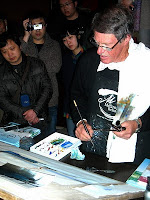