The following workshops are confirmed. More will be added, check the Workshop page on my site. I know the workshop for PVW in Alexandria is full with a waiting list.
2009

Getting The Right Shot.... 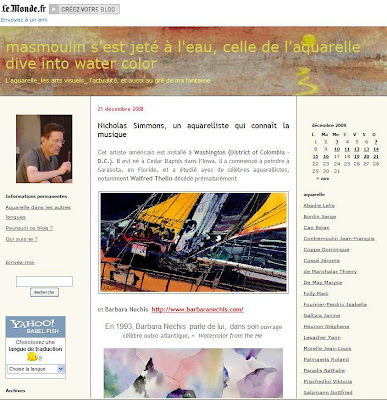 Thank you to Pierre for the attention on his watercolor blog, whose title (see above) translates roughly to "Masmoulin's dive into watercolor." When you put "Nicholas Simmons, un aquarelliste qui connaît la musique" into Babelfish, you get "Nicholas Simmons, a painter in watercolours who is up to all the tricks" heheheh. (I got a better explanation from Pierre!) He has blogged about many great painters on the watermedia scene, and documents his own watercolor journey. Check out his blog here.
Posted by Nick at Sunday, December 21, 2008 6 comments:

I started this blog a year ago today, and have averaged one post every 4.5 days, drawn 22,000+ visits (Sitemeter doesn't count mine) from I don't know how many countries, and evidently have entertained some people enough to warrant returning regularly. Some of the best watermedia painters in the world have looked in, and even commented. Music fans, old colleagues, students and bandmates, workshop attendees, collectors, and the occasional long-lost friend. I was even honored with a post from Bruce - um, 365 days ago! :) 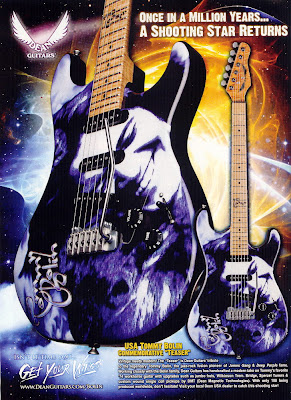 Well, it's all been exciting and a lot of fun, but even more exciting is what's happened with Tommy Bolin over the past 12 months. Johnnie Bolin, Dean Guitars, and I introduced the commemorative "Teaser" guitar at NAMM last January to a spectacular reception (see posts from Dec. 2007 and Jan. 2008), and the new January 2009 issue of Guitar Player magazine has a full page ad for the guitar on page 82, opposite the cover story on David Gilmour - appropriately, in my view, as Pink Floyd's legendary guitarist has been another huge influence on me. The ad utilizes the tag line I came up with, Once In a Million Years, a Shooting Star Returns. We're very pleased that the guitar has nearly sold out, and is already being auctioned on ebay with starting bids at the list price. There may be more Tommy axes from Dean in the future! 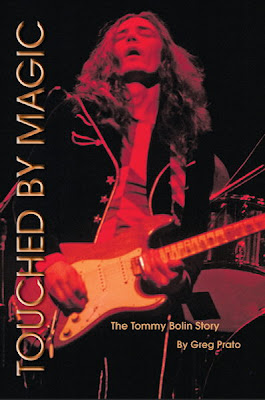 But it doesn't stop there! Greg Prato's new book, Touched By Magic: The Tommy Bolin Story, is now available! This is the book so many have been waiting 32 years for, and we are all indebtted to Greg for taking on the project. He interviewed approx. 50 people (including myself), all of whom either knew, played with, or were otherwise connected to Tommy in an important way. I haven't gotten my copy yet, but my nose is glued to the window, waiting for the postman. The book can be ordered here. 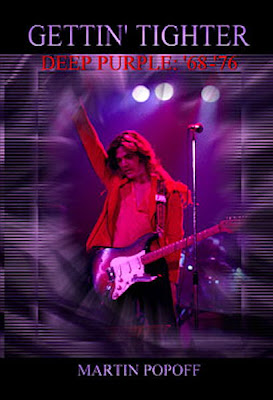 As if that weren't enough, Martin Popoff's history of Deep Purple from the years 1968-1976 - the years that matter - is hot off the press. Extraordinary. One might think that the title of the book - if it were to use the title of a Purple song or album - would be something culled from one of the classic, "signature" Purple periods: Shades of Deep Purple, Machine Head, Highway Star, Smoke On the Water, Made in Japan, etc. But no! Mr. Popoff instead used the title of one of the tracks Tommy wrote for Come Taste The Band: Gettin' Tighter !!! I still remember when I heard that song for the first time, and was floored. Tommy had reinvented the wheel, and injected a grinding American bluesiness, funk, and jazz-fusion sensibility into the British supergroup's patented monstrous sound. Popoff didn't stop there. One might expect a picture of perhaps the Mk. II lineup on the cover, or maybe the Lord/Paice/Blackmore core, or, predictably, one of those familiar pics of Ritchie Blackmore. No again! Instead, a never-before-seen photo by Richard Galbraith - from a roll of film thought to be lost forever - showing the one and only Tommy Bolin in a shot that sends chills down the spines of disciples. (the famous jacket can be seen more clearly here, scroll down) How cool is that!! Read more about the book, and order it here.

Since I came up with the idea of the guitar, and got Johnnie together with Elliott Rubinson of Dean Guitars, there has been a snowball effect of Tommy's visibility: a great feature in Classic Rock magazine, the cover of Guitar Player magazine in February 2008, another feature in Guitar Player, June 2008, "10 Things You Gotta Do To Play Like Tommy Bolin" (good luck!), Greg Prato's new book, and Martin Popoff's new book. The Tommy Bolin Archives site and TommyBolin.biz are busier than ever, and the CDs just keep rolling out. The buzz gets louder each day as new generations of music lovers discover the genius of the beautiful kid from Sioux City. Coincidence? I don't think so. :) I used to scrawl "Tommy Bolin Lives!" on the walls of my highschool. It's true.
Posted by Nick at Monday, December 15, 2008 6 comments:

The Zen Board is cool! It uses what is known as "magic paper" - you simply paint on it with water, which then turns to a rich black...and completely disappears a minute or two later to a reusable state. Lights and low humidity contributed to faster-than-normal drying/evaporation in this video; however, developing speedy brushwork and thinking is invaluable for location and life painting/drawing. The video is in real time. I used my own music in the background. A big thanks to Princeton Art & Brush Company, whose fine Series 4050 synthetic sable brushes were used. Also thanks to my great friend Debra Halprin, who gave me the Zen Board. (insert hug and kiss emoticon here)

Turn up your speakers!

The new Winter 2009 issue of Watercolor magazine (American Artist publication) has a 14-page feature about my work written by UK artist John A. Parks. It's a great spread, the largest in the magazine - I'm indebtted to John and to the editors! Subscribers are receiving it now, and it will be on the newsstands December 16.

Thanks also to Da Vinci Paint and Creative Catalyst Productions for their full-page ads inside the front cover - I appreciate it!

For obvious reasons I don't want to post high-res pics, but here is the opening paragraph:

Nicholas Simmons paints in watermedia on a scale that rivals oil painting. The subject matter is a dazzling mix of figures juxtaposed with printed lettering, graffiti, Japanese block prints, neon lights, reflections, and lavish corners of nature. The effect can be disorienting, as though a camera has taken a picture by accident, revealing an image that is both exciting and mysterious. The paint itself swirls, floods, drips, and spatters, driven on by the general excitement of the imagery and giving the work a sense that it was done in a rush in a matter of minutes. 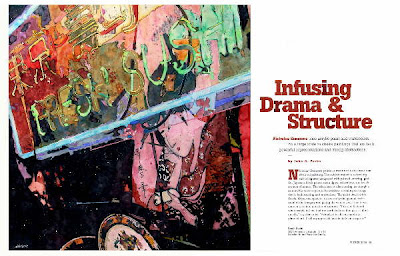 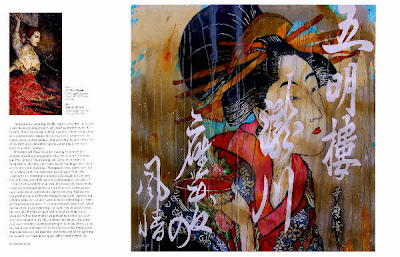 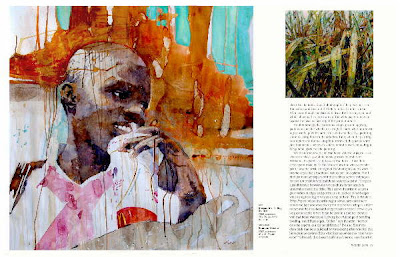 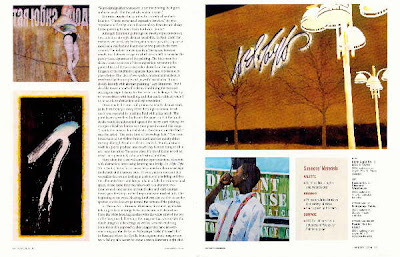 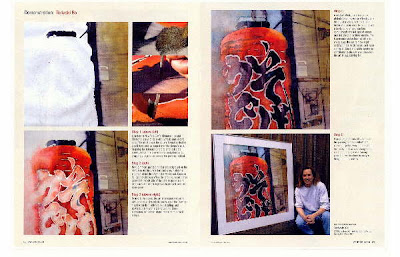 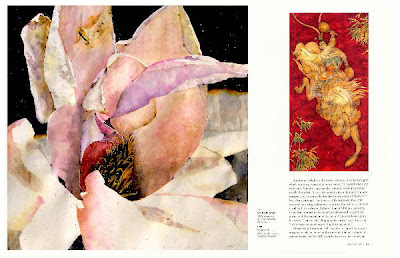 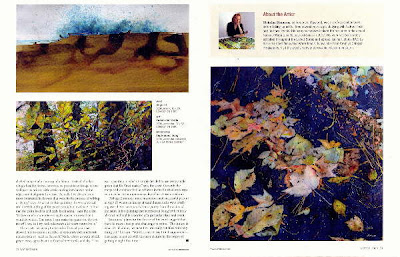 Friday night I went to an opening at the new American Contemporary Gallery in Annapolis where there is a group exhibition that includes Carol Carter. I hurried down there, as Carol and I have missed meeting on a few occasions, and I wasn't going to let that happen again. The gallery is killer, has the proper Soho/Chelsea vibe, and is a perfect venue for large-scale contemporary work.

Carol has some fantastic new watercolors from her swimmer series, and several acrylics that are done in a rawer, opaque, edgier (pun intended) style. I'm already quite familiar with her paintings, but it's always inspiring to see the work of an artist you admire in the flesh. Better, is when you meet the artist in the flesh! I also got to meet her brother Sam - he's for real! :) - and and his lovely gal. 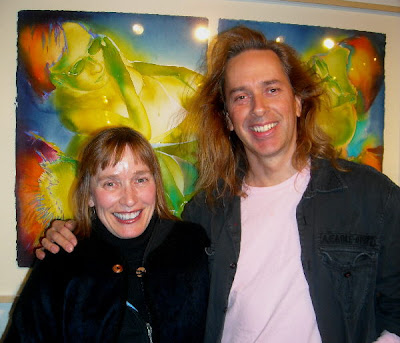 It was a gas to meet the gallery owner/director, John Bodkin, who is also an artist. This guy is totally cool, and a raconteur of the first water who kept me on my toes with stories of encounters with some of the most famous 20th C. American artists. The whole time we spoke, I kept thinking "I know this guy." Lo and behold, I got him to admit that I had indeed seen him on a number of TV shows, commercials, and at least one film (Coma) that I was familiar with. I knew it!!! 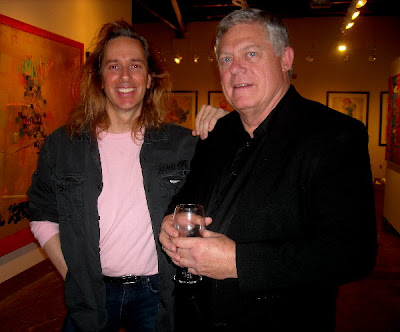 I'll be returning to the gallery soon with some friends to check out the exhibit again. Thanks to the gallery, John, Carol, and the other artists for a splendid evening! 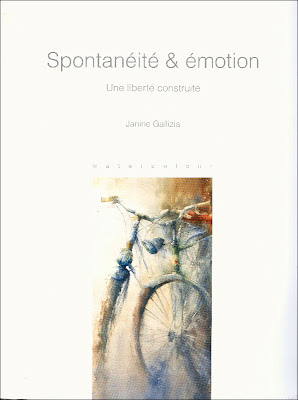 Janine Gallizia is an Australian watercolorist living and working in Europe. She is a very successful artist, with a busy schedule of exhibitions and workshops throughout France, Belgium, and beyond. She is also one of the foremost ambassadors (to use Wayne Roberts' term) in this business, organizing events that feature some of the biggest names in contemporary watercolor painting. I am fortunate to have become friends with her, and am indebtted to her for including me in one of these exhibitions.

I gasped when I first saw her work, and she continues to amaze me with her incredibly sensitive and virtuosic handling of the medium. The subject matter ranges from everyday city and cafe scenes, to intimate glimpses of her studio and home, to dream-like visages of Venice - where she captures the atmosphere and mystery like nobody else. I'd post some images here, but I'd have no idea where to start - or end. Go to her website!

Janine's first two books, Lumière & Ambiance en Aquarelle and Rester Simple! are sold out, but her new book and DVD, Spontanéité & émotion…une liberté construite are now available. I have both, and find them absolutely entrancing. (If I ever do a book, this is how I want it to be.) They are written/spoken in French, of which I have a severely limited knowledge, but it doesn't matter - I nonetheless hang on every word, and have spent some time translating text. Most of all, it's the images that matter, and seeing how she wields the brush. I strongly recommend purchasing the book and DVD. If possible, try to get into one of her workshops - I know a few artists who have, and their experience was unforgettable.
So, who loves Janine's work, can't wait to meet and learn from her, thinks she's beautiful, and....speaks a little French???