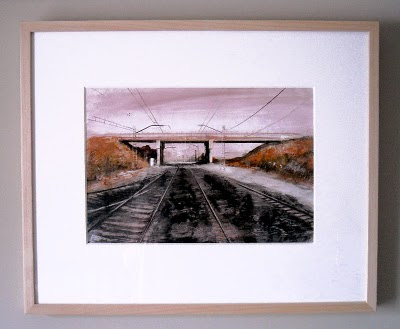 Hidden Landscape IV - watercolor, 28 x 42 cm
Juankar Cardesin is an artist in San Sebastian, Spain. It would hardly scratch the surface to refer to him as a watermedia artist because his work is all over the map -- not just medium-wise, but also in subject matter and handling. It's hard to put into words what he does, it really must be seen. And felt. However, following the initial shock of stumbling over his blog (thanks to another heavyweight San Sebastian painter and compadre, Enrique Ochotorena), I came to two conclusions about his art:

1. He is absolutely fearless, or, alternatively, he is terrified of everything.

2. He is an extraordinarily sensitive person, responding like litmus paper to his environment.

I should explain. I believe Juan will paint or draw anything, and in the way he feels at the moment -- something that is very, very difficult to do without succumbing to self-doubt, and that artistic governor that shuts down the motor when things get too far afield. There is an honesty in that approach that is enviable. But in attempting to analyze it, I wonder about the presence of a yin yang gene that, instead, drives the artist through fear and awe; fear, if nothing else, in the prospect of losing an idea or precious flash of inspiration. This is a raw artist, exposed nerve endings in a constant state of flux, without buffer or filtering mechanism between heart and canvas. This guy won't make you question whether or not he is an artist, but whether or not you are! And that, is scary.

In artspeak, Juan might be characterized as a sort of Expressionist-Deconstructionist-Minimalist, with notes of Picasso, Schiele, Mauricio Lasansky, and Euro-trashism. Decay is a major feature in much of his work, be it human or industrial. The painting above, Hidden Landscape IV, is watercolor on Martele Damier paper, which is a synthetic surface similar to Yupo. This painting arrived on my doorstep out of nowhere last December, which tells you something else about the artist: he's a wonderful and generous man. We've become quite good friends via the Internet, and it was my loss last fall when my planned trip to San Sebastian fell through. I did experience a Cardesin-induced near-cardiac-arrest when I beheld his magnificent Shining Mountains while judging the Shanghai Zhujiajiao International Watercolor Biennial (shown below with our mutual friend, Javier Oña, a great painter from Cadiz, Spain). 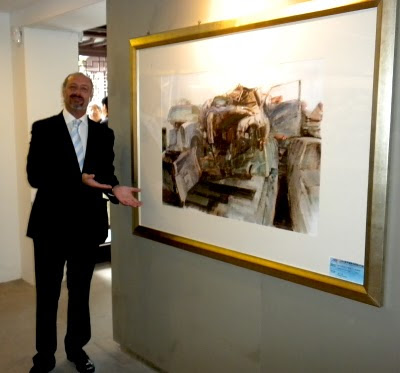 Shining Mountains - watercolor, 65 x 95 cm
Going to Juan's blog is always a chest-pounding adventure, you never know what you're about to see. And good luck trying to keep up with him -- he's incredibly prolific! He has what a departed friend of mine, jazz pianist Fred Williams, used to call "the worm." The term refers to musicians and artists who are so compelled to create, they simply cannot stop, cannot rest. I've said that true artists are explorers, and Juan Carlos Cardesin is one of the trailblazers.

Music by Ennio Morricone from the Giuseppe Tornatore film, Cinema Pardiso. This is an arrangement I made of the main theme and love theme. If you haven't seen the movie, I highly recommend it -- the last scene is surely one of the most beautiful ever. Also, don't miss another Tornatore/Morricone masterpiece, Malena, my favorite movie of the past decade.
* * *
I'm headed this week to Krakow, Poland. My next post should include some photos of that magical city, where much of the world's attention has recently been focused. To na razie!
Posted by Nick at Saturday, May 01, 2010 8 comments: