Guess Who's Coming To Dinner?

I posted this in an art forum a few years back, and found it fun and very revealing. Maybe a few will post their invitation lists here, I'd like to read them. It's best to confine it to people who aren't around anymore, and to not include departed friends and family. As such, I cannot invite Uncle Fester, President Obama, nor Hannah Montana. 1. Mark Twain - has to be the #1 historical person I'd most like to meet. The dinner, in fact, would likely be in his honor.* 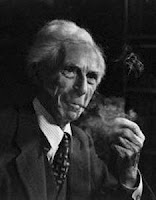 3. Bertrand Russell - only philosopher I can understand, will hopefully explain stuff I don't get. 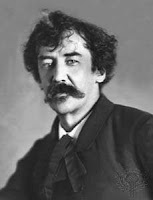 5. Whistler - you might think I'd have more artists, but with Whistler present, no others are needed (and he'd be the first to point that out). Also exempts Oscar Wilde, et al., kill two birds with one stone. 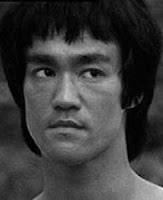 6. Bruce Lee - had to think about this a while, and it marks me as a hero-worshipper from a certain generation. But I believe there was a lot to him besides the karate, and everytime I heard him speak (well, not as Kato, but...) he seemed to make profound sense. He could also kick yer ass, and that's kind of cool too....maybe the most amazing athlete ever.

7. Tom Lehrer - oops, he's alive. Sorry. OK, I'm going for an alternate, Peter Ustinov, who beat out last year's alternate, Stephen Potter. There's almost too much talent in Ustinov to be cramming into a dinner party, but this is not just any affair, and it's the kind of occasion where he was without peer. 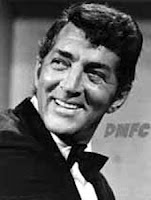 8. #8 is very tough, because you realize how close you are to the end of the list. (A couple of times the planning committee stretched it to a dozen invites, and then people were making it a baker's dozen, etc. It got out of hand, so ten is the official limit.)So you can't choose just anybody for this chair, it's too precious. Blago could have got millions for it. Anyway, this year it goes to Da Vin.....I mean Dar....I mean Dino! Once again Dean Martin, my favorite entertainer, makes the Top 10. The King of Cool edges out other stiff cocktail competition like Galileo, Shakespeare, and Mother Teresa. (he'll go on after Chopin) 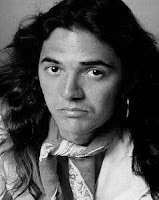 9. Taking booze, drugs, and a fast life to another level, Tommy Bolin. Sort of a given with me, ultimate modern age tragic genius.

10. Regaining some dignity, but not shrinking from the dramatic, Amelia Earhart. Never had her before, way overdue, would like to know what happened. Joan of Arc on next year's wait list again!

A bit lowbrow, no doubt...heavy on the entertainment with a touch of glamour, light on statesmen, religious leaders, scientists, and, strangely, women. (no "revealing" jokes, please) So what, make your own list!
* Whistler thinks it's in his honor.
Posted by Nick at Friday, January 30, 2009 14 comments:

Thank you to the 28 members of the Potomac Valley Watercolorists who attended the workshop Friday and Saturday - what a great group of artists and very nice people! Many are advanced painters with signature memberships and lots of experience, and as usual, I probably learned just as much, if not more, than they did. Once again, Da Vinci Paint generously supplied free triad samples of their fluid acrylic, and everyone was impressed by the vibrance and versatility of this totally boss paint. PVW also made me an honorary member which was quite unexpected and much appreciated! Special thanks to Marilyn Milici who organized it, and to the board who invited me to judge the show and conduct the workshop.
Posted by Nick at Sunday, January 25, 2009 6 comments: 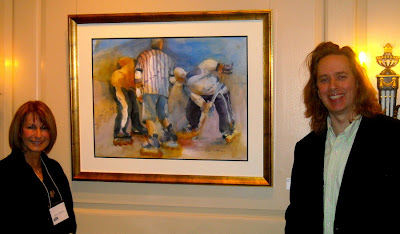 The awards reception for the 35th Anniversary Exhibition of the Potomac Valley Watercolorists took place tonight at Strathmore Mansion in Bethesda. It was a bitterly cold night, but there was a very good turnout - lots of fur coats, high fashion, and my wife even wore her chapka. I gave a brief talk, and then 21 awards were given out. Seen above is Elaine Hoffman with her remarkable painting Face Off, which I awarded first prize. It is a marvel of transparent watercolor painting, rendered in a loose but utterly commanding and convincing style. The palette is superb, the composition killer, and the picture truly transcends the rather unexpected subject matter (hockey players). I wish I had painted it! There are many very fine name painters in this organization, so there was plenty of first rate competition. Congratulations to Elaine, and thanks to PVW for inviting me to judge. The workshop I'm doing in conjunction with this show takes place January 23-24 in Alexandria. It's full but there is a waiting list - contact Marilyn Milici for information.
Posted by Nick at Thursday, January 15, 2009 6 comments: 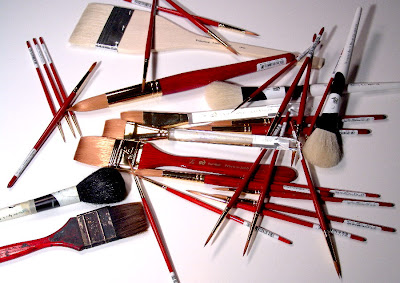 While at the SCAD expo in October, I was introduced to Howard Kaufman, the man behind Princeton Art & Brush Company. Howard is the former CEO of Grumbacher, so he knows the art business. I was demonstrating for Da Vinci at the expo when we met, and that's when I realized my two favorite brushes (1 1/2" flat and a mop, both seen lower left in photo) are Princetons. It was a very good time to realize that, and now I am exclusively using Princeton brushes! I love their synthetic sable 4050 series - that 1 1/2" has held up very well to plenty of abuse for about five years. I use the same brushes for watercolor and fluid acrylic, and while I constantly wash them out, I'm not always thorough, and sometimes even forget. I'll be using some of the pure kolinsky 7150 series also....no acrylic allowed with those!

Thanks again for your generosity, Howard, and even more for your terrific brushes. :) 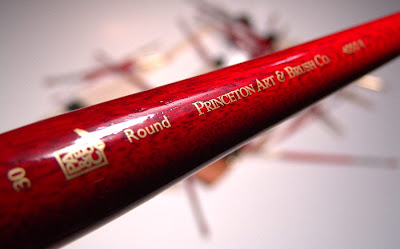